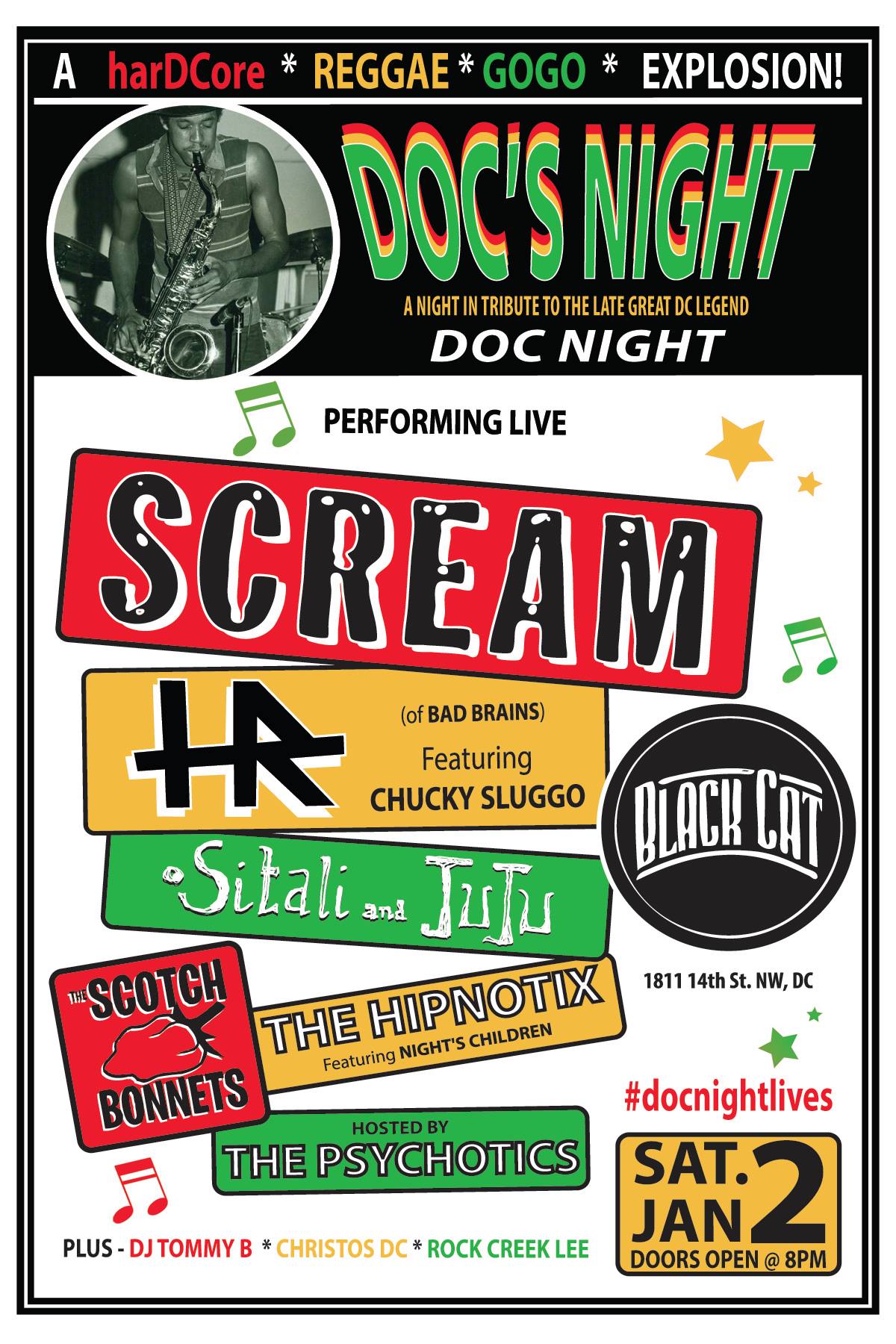 (Hatchet here. This is the eulogy I wrote that Pablo read at Doc's memorial. If you live anywhere near the DC-area, it would mean the world to us if you came to the show.)

Doctor Night, as I was fond of calling him, lived large. He was a tall guy, and he was my favorite tall guy. Tall girls need to be around tall guys; it helps us look more normal. Not that Doc and I ever looked, or acted, “normal” when we were together. And that was just fine by us.

Doc Night lived loud. Loud in speaking, loud in singing, loud in playing, even loud just walking down the stairs with those big feet of his. Whenever the guys in our band The Scotch Bonnets would say, “Kristin, ya know, Doc’s always singing louder than you. It’s your band and he’s overshadowing you, that’s not cool” I’d just nod my head in agreement. But I never did much about it, other than maybe tell a sound man to be careful of his sound levels, because I never wanted to keep Doc from being himself. Being loud was just a part of that beautiful cacophony that was Doc.

Nobody could eat like Doc. For such a bean pole of a man, he had the appetite of at least two fat boys. We’d be leaving for a gig and, before we could even get out of the neighborhood, Doc would have quietly slipped away, coming back a few minutes later with a big bag of “shnacks:” a footlong sandwich, a tub of macaroni salad, a bag of chips, a little sweet potato pie, a bottle of ice tea, and maybe a bottle of water. And he’d consume everything in the van before we got to the gig and be hungry for more when we got there. He was high-energy and he always said he had a high metabolism. Whatever it was that kept him that thin, if he could’ve bottled it and sold it, he’d have made millions.

It’s funny but when I think back on all the amazing things about Doc, I can’t help but think about those things that drove me crazy but that I’m equally gonna miss: the empty bottles and takeout containers that littered my house after he’d spent the night, the piles of sweat-soaked tee-shirts and fancy hats he’d leave in the van after shows, the way he was often late for local gigs but always made it to the stage just in time to play, the way he’d listen to music on his earbud headphones so loud that you could clearly hear what he was listening to, and the way he’d sit with his eyes closed, head bobbing and occasionally singing along but seemingly to only the most offensive lines in the song. You couldn’t do anything but joke that Doc was prone to outbursts of Tourette’s.

When I first was getting to know Doc he would often tell me wild stories about people he knew, people he played with, and at first I honestly didn’t believe him. I’d been playing music for a bunch of years by then, and I’d heard enough dudes’ ego-trips to know most of them were just lying to me to try to build themselves up and impress me. Why was this crazy maniac any different? No way, Doc. There’s no way you played with Dave Grohl. And then I went to that first Foo Fighters show with him, Pablo, HR, and Grant. None of us had tickets but Grant and HR got in right away because Grant went with HR and HR is, well, HR. The other three of us hung out in my car for the rest of the day, trying to get someone to let us broke musicians into the show but it never happened. However, there was an after party as there always is, so we were determined to get into that. Pablo knew someone working at the first security gate, so we rolled right through it. But there was no budging the guy at the second gate: we didn’t have passes, so we weren’t getting in. That’s when Doc ever so calmly took his phone out of his pocket and called Grant, whom he knew was hanging out with Dave Grohl. Suddenly, I could hear Dave’s voice on the other end of the phone, giddy as a schoolboy, saying “Hi, Doc Night! Hi, Doc Night! Are you at the gate? Do you need me to come get you in?” And when we did get let in and get back to the Foo Fighter’s party, where Dave was grinning from ear to ear as he bounded out of his trailer to gave Doc a big ol’ hug, that’s when the proof was in the pudding, that Doc Night was the real deal.

Nobody played music like Doc. Nobody! It was onstage that all his larger-than-life qualities found a home, coalesced into the monster performer that was he. Doc Night was a musical force of nature, often leaving a trail of dropped saxophones or yanked instrument cables in his wake, but always lighting up the stage and commanding awe and amazement from all who bore witness. Music came naturally to Doc, flowing freely from him like water, like electricity. Doc could do anything. He could front a band, he could play a great sideman and hype guy, he could play sax, sometimes he would even play drums. I loved singing with Doc; he was the Marvin Gaye to my Tammy Terrell. Wherever one of us went, the other would closely follow. If I decided to version out a song, to sing the melody from one song over an open jam section of another song, Doc would come in with a perfect harmony or countermelody within a couple of bars. Doc could, and would often, play or sing songs he didn’t even know. And sometimes this would really stress me out. I’d say, “Doc Night, can you sing such and such song? Are you sure you know all the words??” And he would just say, very calmly, “Oh, of course I can sing that song.” And usually, Doc wouldn’t know all the words but he would just fake it: repeat the few words he did know, scat or hype over the parts he didn’t know, and it was always flawless. Musically, Doc was fearless. He never held back, he always just went for it. He could be soloing on his saxophone in an unfriendly key and it didn’t matter; Doc would just do it for good or bad, and his massive tone (soulful, gritty, complex, and totally unique) would carry him through.

A band Doc, myself, and my other Scotch Bonnets bandmates all really enjoy is The English Beat. The original incarnation of the Beat had an older saxophone player whom they called Saxa in their lineup whose age and experience brought gravitas and cred to the band, whose sax lines were iconic to the Beat’s sound. I alway thought of Doc as my Saxa, that I was lucky to have someone with his wealth of experience in my band. When we toured, Doc’s stories of the DC scene in the 80’s always delighted our fans, hungry for first-hand accounts of an influential musical time and place they’d only read about. As apparent by how many people wrote tributes to him on Facebook, Doc really made an impact on the people he’d met only once or twice. In the midst of my sadness over Doc’s passing, I found comfort in words from our friend Zach Brown when he reminded me that, in the last years of Doc’s life, he was so happy to be playing and touring with the Bonnets, to be out there doing what he was born to do, and we were all so happy to have him there with us.

Family was the central thing to Doc. He loved his parents, his brothers, and he doted upon his children any chance he got. I think it was because love of family was so important to Doc that it made him such a genuine friend. He would always call you to see how you’re doing. That man certainly could TALK (and his phone calls could easily become an epic, hour-long gabfest) but he also knew how to listen. He was one of the most supportive and encouraging friends I knew. I’ll miss his counsel, not only on the band, but on matters of the heart. Doc understood heartbreak and, to the end, just wanted someone to love. He saw value in me that I don’t always see in myself and was always there to build me up when I was feeling down. Doc was the guy in the band who, when I would get overwhelmed and driven to tears, would comfort me, give me the biggest, best hug and help me pull myself together so I could keep moving forward. I honestly don’t know how I’m going to go on without him in The Scotch Bonnets. The hole he leaves is large enough to swallow most people…

You could have uncomfortable conversations with Doc and he would be accepting of them, even if the things you were telling him were things he didn’t want to hear. It takes a very big person to do this and, as I’ve said before, Doc was huge. He had the best smile of anyone, ever. Just like everything else about him, it was huge, it was toothy, sometimes goofy, and always heart-warming. You couldn’t help but smile whenever Doc smiled.

They say the brightest lights burn out too quickly. But I wouldn’t say that about Doc. His light shined just as bright as many he lost along the way and yet he still had enough time in this life to have a family, raise two kids, play in countless bands, travel a bit, and make thousands of friends. I would say that Doc was just too large, his spirit was too big for the confines of this small world and that it needed more space to move, to spread its wings to their full span. Or you could simply say he missed his mama. I am certain he is with her again, and now they both have the expanse of the universe in which to play and sing and laugh and be free. I’ll miss you fiercely, Doc Night but the show must go on, as I know this is what you’d want. To the musicians in attendance today, I say play on for Doc! To those who don’t play but love music, dance for Doc! I know he will always be with us in the music. He will be smiling, and therefore we can smile too. Thank you very much, one love…